This was the weekend I was going to go rural and brew more beer, sweet golden sparkling nectar. But for various reasons I did not get out of town, and thus no beer-brewing. Instead my phone rang this morning, and there was Love (Dalén) on the line. “Hey, I’ve got some Russians here, they’ve got some really old stuff from some place really far away, you want to come over and have a look?”.

So, instead of handling malt and yeast from England I ended up with bones and teeth from the other side of the world. And I learned a lot, that is a lot on how Google translate works. Because the colleagues from Russia did not speak any language I speak, and my Russian as well as Loves is mighty rusty to say the least. But with a computer, a keyboard, and Google translate you can almost make yourself understood. 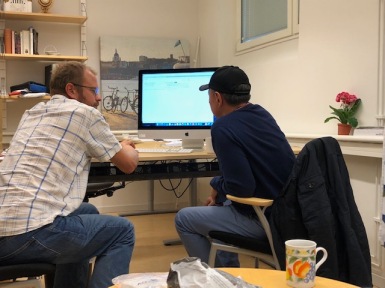